Let’s look at the chords used in the “Balloon” song from our earlier lessons. Please refer to the image for this section. The notes of the chords are written in the Bass Clef of the staff. The chords are also written above the Treble Clef in text format:

As you can see from the color coded notes on the image of the keyboard, the formula for constructing a Major chord is:

Let’s look at some other formulas:

Play each one of these types of chords on your keyboard. Use the formulas shown to construct each chord. Do this 3 different times using the root notes C, F, and G.

Now try building some Major chords on sharps and flats. Use the root notes E flat, A flat, C sharp and F sharp.

Spend about 20 minutes doing this. 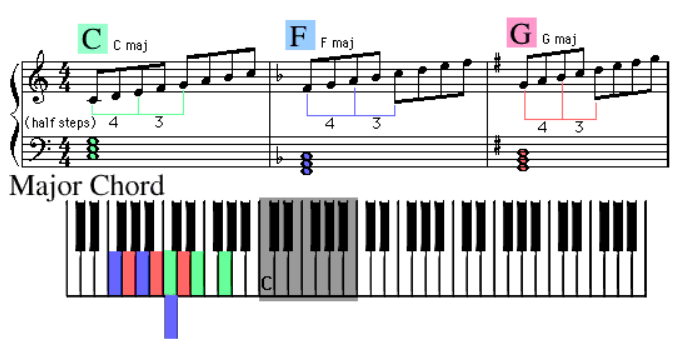 Next, let’s begin to simplify the chord formulas using whole and half steps.

The formula for constructing a Major chord would be:

Minor chords (such as Am, Dm, and Em)
minor third + major third

Record all of these chord formulas in your music note book.

You can also note that:

Refer to the image for this section.

Consider that Major sixth chords such as C6, F6, and G6 would use the number VI (6th) note in each scale.

Consider Major seventh chords such as Cmaj7, Fmaj7, and Gmaj7 would use the number VII (7th) note in each scale.

Question: If you saw the chords C9, F9, and G9, which top note in the chord would you expect to play?

Answer: 9 notes away from the root note.

For a C9 chord that would be the root plus 9 notes, which would be a D note

For an F9 chord that would be the root plus 9 notes, which would be a G note

For a G9 chord that would be the root plus 9 notes, which would be an A note

Starting to make sense yet?

When you see a chord name like C6, it is telling you to play the chord C Major and also add the number VI (6th) note.

Congratulations! You now have the method and the knowledge to figure out any chord written for the piano! There are a few more tricks to learn but with what you’ve learned today, you’ll be able to figure out about 85% of all the chords you’ll ever see that are written using the chords letters and numbers such as D6.

Chords are like the different scales (with different numbers of sharps or flats). The more you use them, the more you will remember them without having to go through the construction process each time.

Remember . . . chords are just a group of notes that like to hang out together and help a melody line along the way.