Eight is great! It’s good to see your efforts to learn the piano and Jazz music. Ready for another lesson? Let’s get started.

No matter where you live, there is one set of changes known throughout the Jazz community as a standard and a staple. This set of changes is known as the 12-Bar Blues. Knowing how to construct and play a set of Blues changes will be very important to you in your journey into Jazz.

A 12-Bar Blues is a set of chord changes that is 12 bars long and repeats several times until each player in the group has exhausted their musical ideas during their solo. The performance of a 12-Bar Blues can be as brief as a few minutes and as long as a few days. I’ve been to a few jam sessions that have played the same 12-Bar Blues, with variations, for 2 days. Several hundred melodies have been written based on the changes for the 12-Bar Blues. As mentioned, there are also many chord variations for a 12-Bar Blues. We will study most of the basic variations, however, keep in mind that there are many more.

When you are playing with other players for the first time, it takes a few times through the changes for a Blues before everyone in the group settles into a common set of changes for the song.

Using any root note, the formula for constructing the most basic set of Blues changes is, beginning with the first measure:

Using a root note of C, lets see how this looks in the next section. 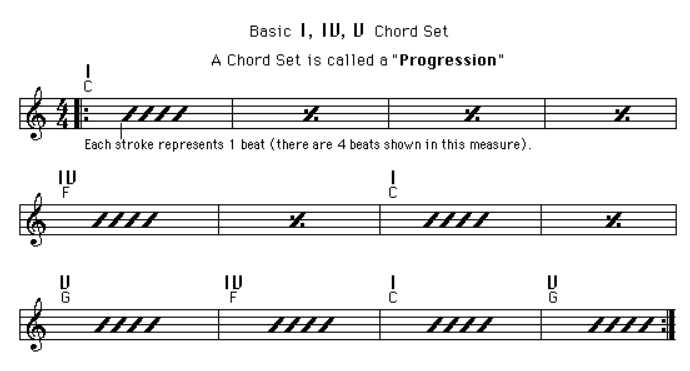 Play the mp3 audio file below to hear the set of Blues changes shown in the image for this section.

Here is a library of variations for Blues changes.

Your Assignment for the Week

Over the next week, go back through the variations show above and in your music note book construct a set of Blues changes for each using a new root note.

May I suggest using a root note of F, A, E, Ab, Bb, or Db? There are many Blues written in these keys.